The EPSON HX-20 sold with an optional add-on, a dual Floppy unit, that turns out to need it's own boot disk. I don't have one, so let's make one using the disks in the unit and a bog standard 486 PC.

The EPSON HX-20 was what most consider to be the first "Lap-top" computer. It ran a funky dual CPU setup at sub-megahertz speeds, included a printer and a tape drive, and reasonable IO, while remaining portable and usable away from the desk. However, this did not match the functionality of most computers at the time, so an external Floppy drive, the TF-20 was sold as an accessory.

The TF-20 was (initially) just two quarter-height 5.25" 360K DD / DS Floppy drives in a case with a power supply, but it was modified to work with the HX-20 via serial. This required a CPU, and IO, which in turn required ROM and RAM.

The TF-20 with the HX-20 communication add-on ends up being a Z80 system running at 4 (?) MHz, and boots itself off the startup disk that is shipped with the system.

Unfortunately, I did not receive that disk with my TF-20, so it sat, un-used, in storage. We can't just use a "normal" PC 1.2 MB drive to write these disks, as they are the 360K type, which has less and wider cylinders / tracks.

Thanks to an Adrian's Digital Basement video [1] I had been informed that almost all FDDs use the same interface - including PC FDDs. This meant, than in combination with the image of the disk on vintagecomputer.net [2] that I should be able to use the TF-20's own drive to make the disk in a PC, without any other hardware!

Once you've made the disk, the TF-20 should emit a particular pattern of disk accesses on a "successful" boot. You can see this on a video over on the vintagecomputer.net site again [3]. It's roughly described as one "long" access (~500ms), one "short" (~200ms) and then another long, before going idle. Each access causes a click of the head loading, and the light comes on for the duration.

At that point, you should be good to hook it up to your HX-20.

As described in Adrian's video, most FDDs use a "Shugart-Style" interface, as they were the the primary company involved in the design of the drives. Any units that weren't sold as part of a highly-integrated unit (for example, Commodore 64 FDDs) would likely be using off-the-shelf units, in the same way the PC did. We can confirm this with the TF-20 Service manual, which is available online, that shows the pin-out is basically the same as the "standard".

The PC actually uses a non-standard "trick" - the Shugart interface has four drive-select lines, allowing you to run four drives. Normally, jumpers on the FDD itself selects which select line the drive listens to. These select lines are arranged in such a way that allows you to swap / invert pins 10,12,14,16 around, which then swaps which signal the drive is seeing. The IBM PC used this to remove the need to set jumpers on the drives. You can see a more detailed explanation of this here: [4]. The downside is that now there's only a way to distinguish between two drives, rather than all four.

The DIP Switches on the drive that we set configure the drive to behave as the second drive (thus answering the second "Drive-Select" signal) and to move the read/write head to the disk (called loading) when the drive has been selected. Most or all PC 5.25" drives load the head when the latch is pressed, so this signal needs to be remapped. 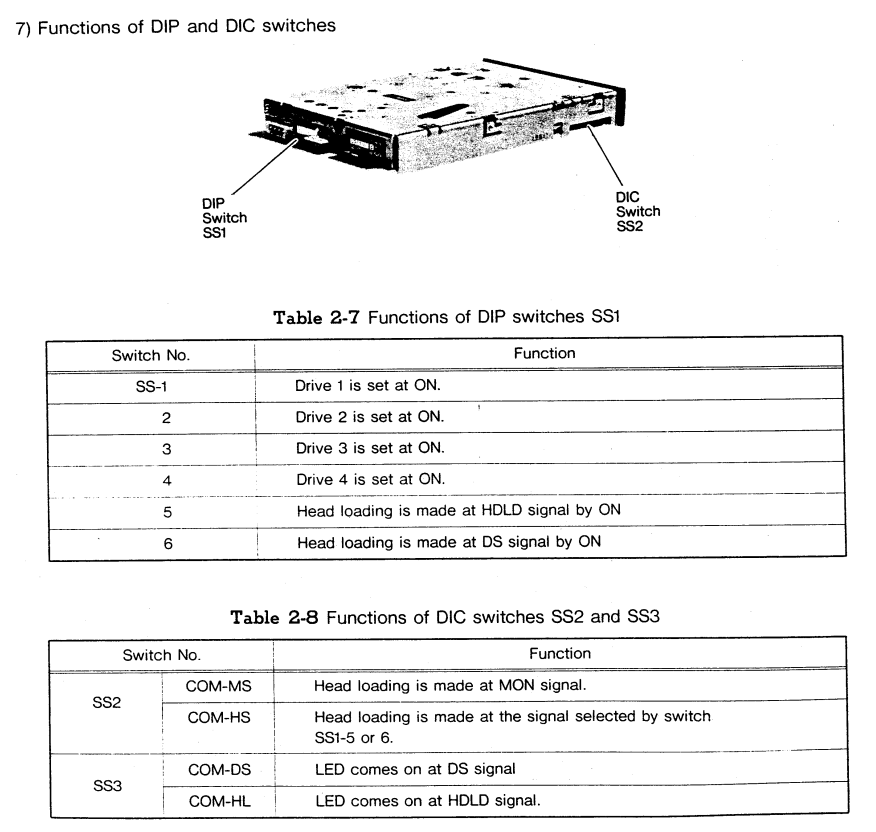 Once the settings are changed on the drive, it becomes indistinguishable from a normal PC 360K drive, and allows us to read / write the disk.